Edison Football tradition centered around rival Miami Jackson and Miami High. Later Coral Gables became a big rival The picture labeled Tom Carpenter is from the 1953 team I think it was the first Edison team to beat  Miami High Coach Parnell was a long time Edison coach Tom went on to play football at West Point and became a Brigadier General US Army 2 tours in Vietnam 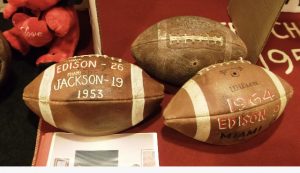 Edison was 5 – 4 going into the game Miami High was 7 – 2 The game was the 43rd Annual Thanksgiving Game The first game was played in 1925 When Edison was Lemon City High Picture of 1937 players Edison Miami High game in Burdine Stadiun (Orange Bowl) . Larry Libertore was Edison QB in 1957 58 .

The great rivalry I ever came across was in Miami. This was the annual Miami High-Miami Edison football clash every Thanksgiving night.

The series started back in 1923. Edison was then known as Dade County Agricultural High School. Each year Miami High managed to defeat Edison. I came upon it in high school, and the cry was “Beat Miami High!” This all started the day school started in September and usually lasted until the third quarter of Thanksgiving night.

For 20 years Edison had never beaten Miami High. Jess Yarbrough (Clemson) was the Miami High coach. Ed “Pop” Parnell, a former Gator, was the Edison coach who suffered many defeats on Thanksgiving. The crowds were unheard of. The Orange Bowl at the time seated 34,000, and it was packed every Thanksgiving. The University of Miami drew 10,000 to its home games. This high school clash had the highest attendance in the state of Florida for football.

When did it end? The year was 1952. Jackie Simpson, later a star Gator, was Miami Edison’s tailback in 1952. He ran up and down the field in Edison’s 21-0 first-ever victory over Miami High. The kids took over downtown Miami for a celebration never before heard of. It was 29 years of frustration, but what a victory parade.

In 1957, Miami Edison High School captured the state championship with a perfect 9-0 record under then head coach Jim Powell. The Red Raiders played their home games at the Orange Bowl and finished #2 in the nation according to the Minneapolis-based National Sports News Service. The highlight of the season was a 20-7 victory over rival Miami High in front of more than 30,000 fans at the OB.

The team’s best player was also its smallest. Quarterback Larry Libertore was only 5’8 and 135 pounds. But no quarterback in Miami-Dade County history could run the option play like Libertore. An explosive runner, he was a threat to score anytime he touched the ball. When he wasn’t running by defenders as a quarterback, he was scoring on punt returns or intercepting passes as a safety on defense. Nicknamed “Little Larry”, Libertore was named High School All American by Scholastic Magazine and Florida Player of the Year by the Orlando Sentinel. 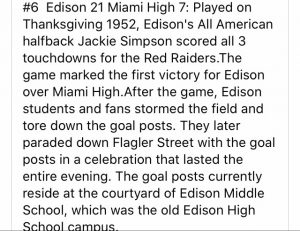 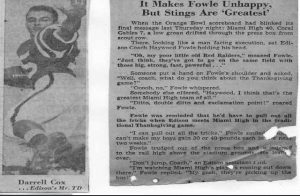 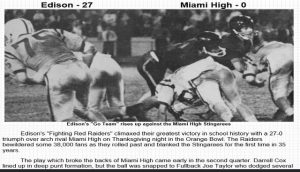 Miami Edison High School halfback Darrell Cox dashes down the sidelines for one of his many touchdowns in 1958. One of the most dominant high school players in Miami-Dade County history, Cox used the Orange Bowl as his personal playground. As a senior in 1959, he set Dade County records for rushing yards in a season (1,482 yards) and most points in a season (167). Both records stood for nearly 2 decades. He led the Edison Red Raiders to a 9-0-1 record and the state championship. His most memorable performance came against rival Miami High when he scored 4 touchdowns in Edison’s 27-0 victory in front of nearly 40,000 fans at the Orange Bowl. Edison finished #2 in the country behind Massillon High School (Ohio) according to the Minneapolis-based National Sports News Service.

During his high school career from 1957-59, Edison was 27-1-1 with 2 state titles. Cox was also a dominant track athlete, excelling as a sprinter and also won the state title in the shot put and discuss, beating competitors who outweighed him by at least 50 pounds. He was named Miami Herald Athlete of the Year along with Florida Player of the Year by the Orlando Sentinel and All American by Scholastic Magazine. He went on to play at the University of Kentucky and spent more than 20 years as a coach and teacher in the Miami-Dade County School system. Cox passed away in 2006 at the age of 65. 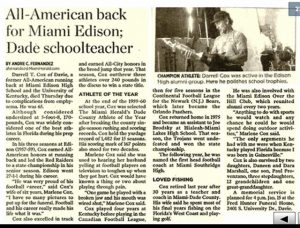 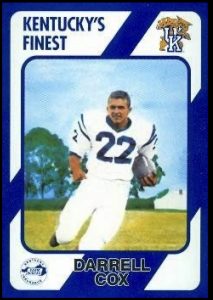 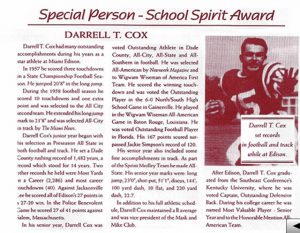 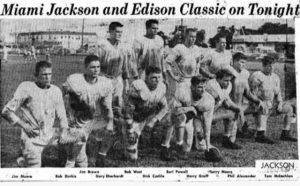 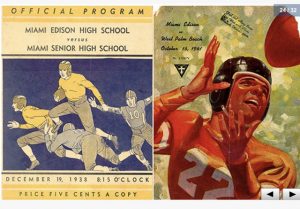 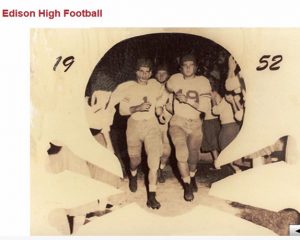 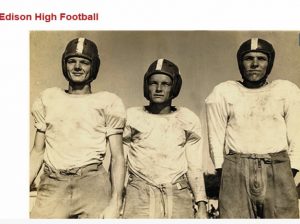 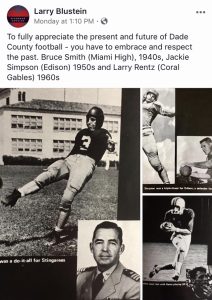 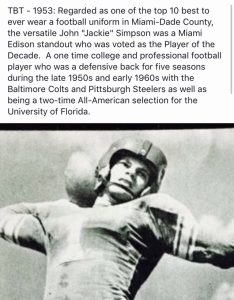 Jackie Simpson was one of the most dominant high school players to ever come out of Miami-Dade County. In 1952, he captured virtually every award a high school player could achieve. He was All City, All State, All Southern, All American and Florida Player of the Year. Simpson went on attend the University of Florida and was a second team All SEC selection for the Gators as a defensive back 1956. After a fine college career, Simpson was drafted by the Baltimore Colts in the 4th round in 1957. He signed with the Colts for $7,800 per season and a $1,000 signing bonus. Before reporting for training camp, Simpson served 21 months in the U.S. Army infantry and paratrooper training at Fort Bragg, North Carolina. After completing his military service obligations, Simpson was activated for the final two games of the 1958 season and became a starting defensive back and periodic kick returner for the Baltimore Colts’ 1958 and 1959 NFL championship teams of coach Weeb Ewbank. Simpson finished his NFL career with the Pittsburgh Steelers from 1961 to 1962.

If you talk with those who watched him play for the Edison Red Raiders from the 1949-52, they will tell you that he was the best football player ever in Miami-Dade County.

While we have had some tremendous athletes, those who grew up watching Jackie Simpson play, will tell you that this Florida Gator and NFL standout was the elite of elite, and without hesitation, should be in every “best ever” conversation.

In a decade that many believe started the elite prospect train, Simpson was the star of stars.

Many watched him and appreciated what he brought to the football field. University of Miami head coach Charlie Tate called him: “A great one. “Someone who could do it all – against anyone.”

His coach Ed Parnell called Simpson: “someone who plays with fire and determination, and refuses to lose.”

While he was best known for what he did on the offensive side of the ball, Simpson had no equal in the defensive secondary, coming up with interceptions and key tackles.

In 1952, the highlight of Simpson’s career turned out to be a rallying point for the Red Raiders. His three touchdowns on the ground and through the air gave his team a first ever win, 21-7, against powerhouse Miami High. That was after 30 losses! 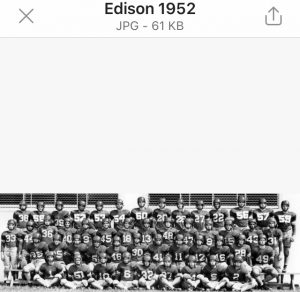