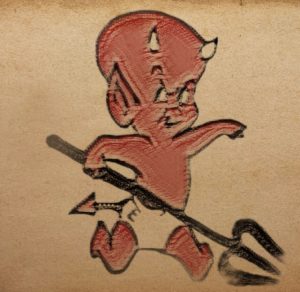 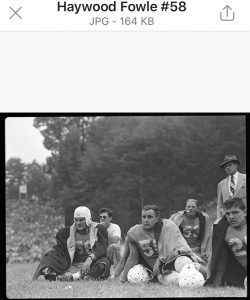 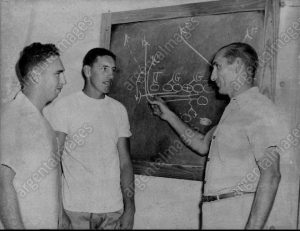 Miami Edison High School coach Ed “Pop” Parnell diagrams a play with assistants Red Bogart (left) and Jim Powell. Parnell was one of the legendary coaches in Miami-Dade County history. Parnell coached the Edison Red Raiders from 1932 to 1942 and again from 1950 to 1955. His Red Raiders won the first football game ever played at the Orange Bowl Stadium, defeating Ponce De Leon High School 36-0 in 1937. During that time, Edison, along with Miami High and Miami Jackson High played their home games at the Orange Bowl.

Both Bogart and Powell were two of Parnell’s best players at Edison.. Both went on to become outstanding college players– Bogart at the University of Miami and Powell at the University of Tennessee. They would follow in Parnell’s footsteps and become respected high school coaches in Miami-Dade County. Bogart coached football and basketball at North Miami High in the 1960s. Powell succeeded Parnell at Edison and led the Red Raiders to a undefeated state championship season in 1957. He also coached at Hialeah High School in the 1960s, where his former players included Ted Hendricks and future baseball star Bucky Dent.

Parnell was one of the true legends of Miami-Dade County football and athletics. He became a coach and teacher at Edison High in 1932 back when the school played its games at Moore Park. On September 27, 1937, his Edison Red Raiders defeated Ponce De Leon High School 36-0 to win the first ever football game played at the Orange Bowl. (Then known as Roddy Burdine Stadium). Ponce De Leon later became a middle school when Coral Gables High opened in 1951.

A native of Stuart, FL and a graduate of the University of Florida, Parnell turned Edison High into a state football power. He coached Edison from 1932 to 1942 before serving in the Navy during World War II. After returning from the war, he coached briefly at the old Miami Tech High School. He returned to Edison in 1950 and coached there until 1955. The Red Raiders played their home games at the Orange Bowl. Although Edison was a power, Parnell’s team always played second fiddle to their rivals Miami High. At one point Edison was 0-28-2 against the Stingarees. But on Thanksgiving Night 1952, Edison finally beat Miami High 21-7 in front of nearly 40,000 fans at the Orange Bowl, thanks to three touchdowns by Prep All American Jackie Simpson. Edison students and fans stormed the Orange Bowl field, tore down the goal posts and paraded down Flagler Street in a wild celebration that lasted throughout the night.

Parnell accumulated a 21-year record of 120-57-14. He had a winning record in 16 of his 21 years and followed his coaching career with a long stint as Dade County athletic director. Two of his former players Jim Powell and Haywood Fowle would succeed him as head coach at Edison. Both would win state titles. Parnell died in January 1985 following a stroke at age 75.